An Incantation to the Cosmic Cervix with Ambrosial Twat as Earth, Monchy Indie as Water, Metagasm as Fire, Fanny Pérez as Air, Mantra as Ether, Poet Annie Doran & Baby Kali in or Nah's W((OM))B with UNDAKOVA as the Heartbeat.

During this powerful, live ritual, pregnant High Prieztezz Or Nah served as the living representative of the Devi (goddess) while five liquids representing the five elements of Hindu cosmology (earth represented by yogurt, water by  water, fire by honey, air by milk, and ether by a type of edible oil)  were poured consecutively over her yoni and collected in a vessel below her thighs. The final mixture of the five libations, empowered by such direct and intimate contact with the living Goddess, was then consumed by those leading the ritual while general worshippers offered prayers  of adoration and chanted the Kali mantra.

Performing a live Yoni Puja utilizing the 5 elements of Hindu cosmology, we invoked KALI – the Hindu warrior Goddess embodying the dark side of primordial nature, sexuality, death, destruction - all that which the tyranny of white western patriarchal colonial imperialism has tried to control or repress. We believe it is Kali who can heal the world over, restoring the archetypal power of the Feminine – both her wondrous life-giving strength and her terrible and chaotic aspects. Shakti jai MAA! 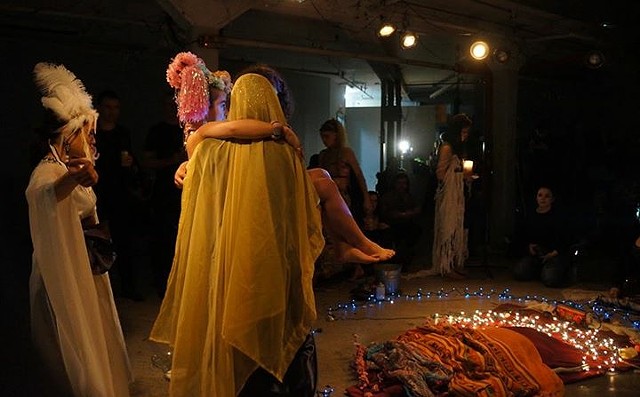